We had runners representing 18 countries for Run Through The Jungle on Sunday 2/28 taking on the beast of a 34k with over 2500m of climbing. One of which was the professional runner, race organizer, Ultra Trail du Mont Blanc and Ultra Trail Mt. Fuji top finisher and ambassador of Patagonia as well as a slue of other sponsorships, Hiroki Ishikawa.

I decided that this guy is going to be my target. With a small field of 100 runners (cap set low to accommodate quite a small (and muddy trail) I saw no harm in following him and picking his brain. I had a good feeling about cracking top 5, but there was no way I’m going to beat him. So as the phrase goes… I joined him.

For the first 16k it was me and Hiroski. We traded stories, woop-wooped to check where each other are when we overtook each other, and even enjoyed the occasional scream from mountain tops. For real, this guy is one of the best running partners I’ve ever had. Rob, if you’re reading this, you’re totally my one and only, and I’d never cheat on you. But you did chicken out of running this race.

Coming out of Checkpoint B 16k (10 miles) in, we were treated to a crazy downhill.

Before I go on, I should mention that it has been raining in Taipei for the past 4 days straight. Serious downpours. Today cleared up and we had some great sun, but the mud was inches deep, and the course was a large percentage D+ incline, meaning it involves hands and feet. Some sections bordered rock climbing.

Anyway, coming down one of these cliffs, we hear another fantastic runner, Chan, coming up. In a manner that can only be described as suicidal, he bombs down the hill past us. And Hiroski takes off with him. Not trying to be shown up, I tag along with them, keeping pace for a few kilometers, but they start to fade to fleeting flashes of their shirt colors between the trees ahead.

We cut down onto a flat road with a slight decline and I know this is my chance. Long legs, good stride, I can kill a 5:00 mile on this downhill easy and catch back up.

But I don’t see them. So I pound on. Nothing. I keep going, and I don’t even hear them. They must be here. I just need to push harder to catch them. Cutting off this glorious road, I follow red tags up into the mountains and down to someone’s house. This is where an elderly man yells to me.

I’ve heard this one on almost every run I’ve ever done. Old farmers don’t like trail runners or hikers, so the natural response is to tell them there is no trail ahead.

On the trail, we were following red and silver markers. Hikers use very similar markers. These were thin red nylon. And then I look down looking for Chan and Hiroki’s shoe-prints. Nothing.

The only thought was oh God please grant me the grace of not being that far away. I also remembered that I have been bombing downhill for at least 5 minutes, and it’s going to take a lot longer to get back up this hill.

I run past the farmer again on my way up, apologize, and thank him for warning me. I need karma on my side right now. He lectures me, something about listening when people talk. I legitimately do feel bad.

When I get back up, the tags are obvious. Two hanging over the road, one pointing into the trail, jetting off to the left. Without my two running buddies, my pace suffers, and I just try to keep up a good effort out of fear of being passed by a runner from behind. Plus, what started as some mild cramping has evolved to what resembles a flashing red light as a future warning sign. That downhill bomb seems to have really affected me, especially following that chase we had down the muddy hill. Lots of quadricep ache, toes locking in a bent position and calf cramping. When I talked to other runners, almost everyone I spoke to reflected these issues, and we accounted it to the mud screwing up our form.

I arrive at the next checkpoint, 21k, I get bad news. I’m told Amelia is 15 minutes ahead, and looking strong. I ask for salt for my cramps, and Petr makes me a nice solution of Tailwind sports drink while coaching me on what I need to do to overtake her and get back up to Hiroki.

Now we still have the section I was dreading the worst. It’s the same portion where Chan bombed by us. It has now held the traffic of 100 runners, and we have to climb back up it.

It’s 4oo meters of climbing, but it’s a mudslide wall. With my cramped muscles, I achely wedge my foot into a tree, look around, grab another nearby and try to pull myself up onto the next, and next, and next. The following 2k take an hour. And it hurts. A lot.

When I reach the summit I fall on the ground. I laid there face-down for what I think was 2 minutes in the sunshine, but it might have been 5. I’m not being dramatic. That climb hurt that bad. I listen to the wind, birds, and expect the sound of a 5th place runner catching up on me, but there’s just silence. Glorious silence.

Getting back up, I have a chance to view the reservoir. Pain, endorphins, adrenaline and the view mix together and I get a bit emotional. It’s not a feeling I can describe.

My legs feel a bit better, but not good. I kick it up to a jog, then a nice rolling–like a mis-shaped ball of clay–run. It hurts, but I can make it the next 4k to the final aid station and treat my wounds there. Poor Tom is a part owner of Runivore, a chia seed and energy bar company made up of ultra runners which graciously agreed to stand outside at the aid stations for over 12 hours.

I immediately sit down next to his tent and demand something saline and a banana. I think at this point, the untreated cramps have just evolved to muscle tears that will probably continue to hurt for the next few days. I rub them while Tom works at making my order like a distinguished chef. Legs are still locking up, no matter what position I sit in but the pain is what’s worse, and I question my quadriceps ability to catch my falling body on this upcoming downhill out of CPA2 and toward finish.

That’s when Tom asks the question I knew he’d ask. “You were in first, bro. Hiroski’s 25 minutes up, but you’re 4 behind Amelia now. Did you get lost?”

YES, TOM. MAYBE I DID GET LOST.

Hold up… 4 minutes? In this struggle-fest, I picked up 11 minutes on her? The other aid station worker checks the iPad again.

From CPA, we have one small climb (of course, slick with mud) and then it’s a straight-up bomb to a flat runnable area. I take the downhill hard. It hurts. I take the flat hard. It hurts too. Both sections, I’m expecting to see the white of Amelia’s bag ahead. I hatch a plan to run quietly, wait until we both reach the road and use my superior leg-length to pile around her and reclaim 3rd place.

But then the road finally arrives, and I am still completely alone. Okay… I guess I’ll run down. 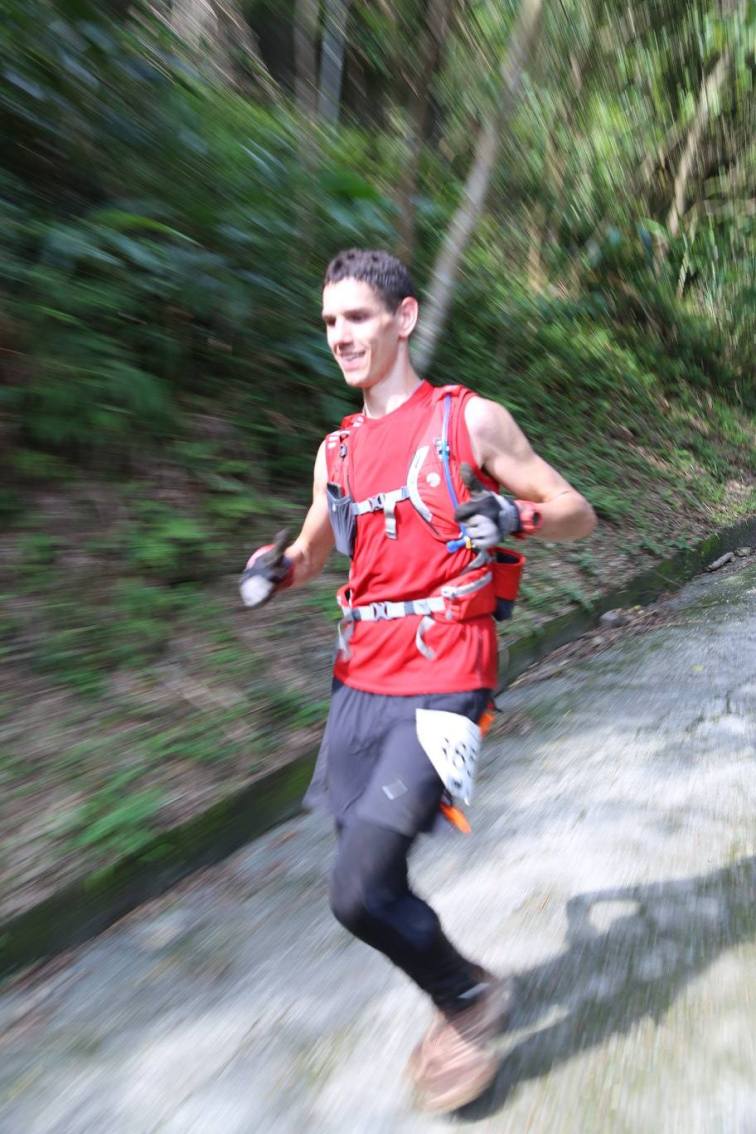 Turns out, prizes are awarded to top three men and top three women. It made no difference that she passed me except for the number next to my name on the results sheet. But that’s okay. We’re not being scouted for sponsors here. This is a down-low back-woods, climb-fest. We’re here to enjoy the view, enjoy each other, and run.

Most of the runners  stay at the temple as the sun sets, drinking free Fullers ESB and grazing on the food cooked by the organizer’s family while we cheer on the runners as they come down the hill to the finish. I get a chance to talk some more with Hiroki before he takes off, and we stay late into the night, helping organizers Petr and Eva clean up.

But my legs are not okay. They are VERY not okay. So I’m going to have a beer and not think about how hard walking will be tomorrow.