My alarm went off at 5 am, but I was already awake. The rain kept me up. The sound of heavy rain usually knocks me out cold. I remember when I was a kid in the summer, I would open my window during thunderstorms, letting rain splash through the screen, just so I could listen to the storms when I was falling asleep. Today was different though. Today I was going to run a half marathon and climb 2000 vertical feet into the mountains of a local national park.

I get ready, tossing things into my bag in the dim light from the bathroom, wade my way down the wet street in the dark, umbrella overhead, waiting for a cab to pass by. To my luck, one rounded the corner before I got not two blocks from my apartment. I explained in my best Chinese where I was heading, and the old cab driver agreed and splashed the car around to head north.

45 minutes later, through the sprinkling rain on the windshield, the glow of the city dies off and flashes of light appear like fireflies from the headlamps and reflective gear of other runners, indicating that we were getting close to the start point. Tucked under their arms were the standard race bag, equipped with their bib number in the waterproof pocket. Seeing the familiar bags to the one in his backseat, he made the connection and asked “ni yao naga?” I “doy”ed and he turned the car to the side of the road.

I cross the gate of a school that looked like it was being consumed by the jungle and find a mess of extremely fit Asian runners, clad in compression spandex, reflective tape, ultra-light backpacks and headlamps. They were dutifully performing their individual superstitious rituals, stretching, bouncing, punching their legs (yeah, they do that here. I’m not sure how masochistic abuse translates to fitness) all huddled under any form of shelter they could find. I stripped my pants in the school hallway, peeking in the windows to see what their classrooms look like and ignored the interested looks from locals. I finished the banana in my bag, took out my orange juice spiked with chia seeds and turned my bag in to the counter.

Everything on my body now would have to travel with me to the top and back down.

I checked my watch and saw I had at least an hour before my group would be let into the woods. I fastened my chip timer and started pacing the gravel track in the back with a dozen or so other runners, partly to warm my muscles, partly for something to do. The chip timer on my foot is how they know where we are and make sure we didn’t cheat. Throughout the course there are rubber mats we run over that beep, telling us that the system registered us going through that section. Later, from a big TV screen, we were able to track the other runners’ progress through their respective courses in real time, and our results are available instantly through some impressive programming. Small races use these at the start and finish to calculate times, big races like the Boston Marathon use them every 5k or so and can use this data for a range of applications, one of which to look for suspicious split times and limit cheating. More info can be found here, if you like that stuff.

As I patrol the school’s mangy gravel track, I heard the gunshot of the first group, the ones who will do 66k to the coast and back. Soon after, I noticed definition of my surroundings. There was no event of a sunrise, but the rain let up and the mountains silently became visible as jagged edges surrounding us in all directions with fog dipping between the crags like whip cream on a sundae. I took in the clean aroma of moss, wood stove and dew, and I was reminded of the mornings waking up with the sun while camping. I checked my watch for the 50th time and decided it was finally time to line up at the starting line.

I cued up Ben Folds – Doc Pomus (chosen very carefully days ahead of time, for it’s relaxing tone yet fast, busy beat) on my android, prepared my run tracker app of choice (mapmyrun) and watched the crowd of bouncing, stretching people surrounding me size each other up, but mostly sizing up the hills that enclose us. The gun goes off, I tap for the workout to begin, zip the jacket over device and start riding the wave of people through the start line. The veterans put their heads down and turn on a light jog and I can see the eyes of the over-zealous newbies dilate as they start a lope up the immediate incline like the bulls in Pamplona.

See you soon, I think as they scramble up the road.

The first 6-7 miles are lost to me. If asked how they went, I couldn’t tell you. Within a few minutes of the start line something happened to my phone and the music cut off. I made a mental note to fix it as we cut curves between each other’s bodies, over bubbling creeks, along road edges and under sloppy wet tree branches. Like someone turning up the volume on the jungle, the lack of Ben Folds turned from silence to the sounds of macaques screeching awake, tropical birds singing their morning songs, rain sprinkling the nearby rocks and leaves, footfalls squishing on the pavement and the slap of heavy raindrops bombing from the massive leaves into my jacket, head and face. I found my comfortable rhythm and rode the trail up the mountain, giving ‘Jaiyo’s to the people around me when we occasionally broke out of our groove and realized we were next to human beings.

Breaking me from my trance was a body hurling down the hill with a familiar bib color. Then another, and two more. This is when I realized I must be near the summit. I counted bodies as they came by to measure my position in the race, and got to 25 people over the course of 10 minutes or so before cones started appearing in the road. Blue tent tops popped out of the fog and we filed over the mat, beeping as our chips registered. A buffet of energy bars, various fruit, water and sports drinks were awaiting us along the turn. I splash water into my face-hole and grab a handful of orange slices, whip around the corner and start heading back down.

You’d never guess we had climbed 2000 feet vertically by looking around. 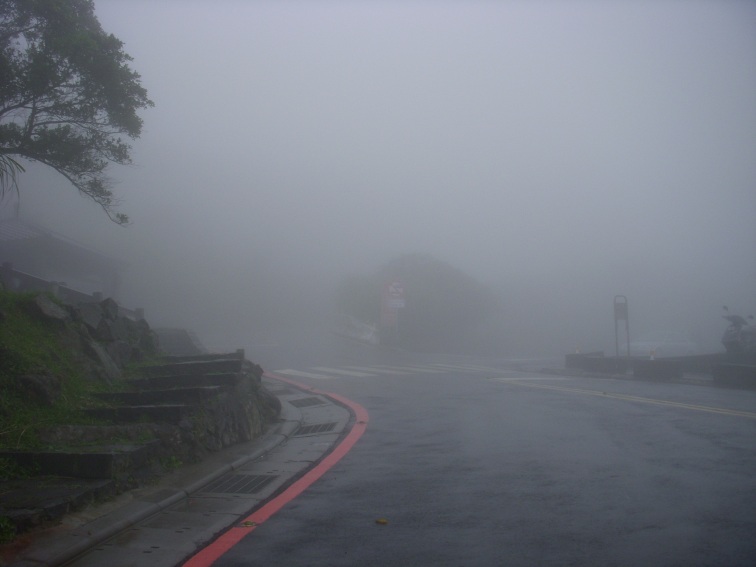 Thick fog and rain surrounded the turning point, slamming us with spray from over the edge. This area is known for having warm winds come from the ocean and meet the cold currents on the other side, creating some pretty crazy weather patterns. I felt worse for the photographers and judges than for the runners.

Down the hill, I started measuring that I probably got passed by 2-3 people who avoided the food and water altogether and were down making their way down hill. I think I accidentally swallowed a few of the seeds from the oranges. I watched the trickle of people coming up the hill turn to a steady stream of huffing bodies, then eventually die down again to the slower folk, grunting their way up the hill. A few stragglers and injured folks littered the path after that, limping downward, grasping the guard rails or sitting and waiting for the judge’s scooter to pass by to ride home. Otherwise, save one guy in a full dark blue spandex body suit, I was alone for the next few miles.

Spandex-man came and went, then came back. I tried to leave him behind out of principal. Nobody who wears a full body spandex triathlon suit to a half marathon should be in front of me.

With 2-3 miles remaining, I kicked it into high gear, as planned. Remembering that the first 5 in my age group get some kind of special award, I wanted to hunt down and pass anyone looking around my age to increase my odds of getting something shiny. In Taiwan though, this can be difficult, so the best bet is to just pass everyone.

I settled into a 7:00/mile pace, which I agreed ahead of time would be a practical finishing speed. 6-8 more exhausted bodies were passed, all wishing me jiayo and exchanging thumbs-up. There were three more guys in front of me that looked around my age. I knew I needed to get by them before we crossed that mat. My legs pummeled the pavement along the downhill slope in a circular frenzy, aching with every landing.

The hard part about distance running isn’t getting tired or losing motivation, it’s the physical toll it takes on your body. If their tendons, heart, joints and muscles could physically handle being pushed this hard for so long, a good runner could handle pretty much any distance with proper pacing. But by the end, my body was just feeling weak and broken.

The cones appeared in the road, indicating the end of the race was near as I slid by their group and rounded the corner of the last block, heading down the road to the school.

The mat beeps, I cross under the finish line and hold open my jacket so the judges can see my bib number. A very attractive Taiwanese woman puts a medal over my head. I’m directed to the printers to have my time and place printed off. I watch the paper come out of the machine while the girl working the computer is chatting up a storm to me, unaware that I’m completely oblivious to what she is saying, and that I’m too busy scanning the sheet for the proper symbols saying how I did.

I see I finished first in my age group, 19th overall. 800 people registered for the half marathon, over 300 went over the starting mat, and 276 crossed the finish line. I’d later find out one was disqualified and I was actually 18th place. I’m told to wait another hour so they can give me my award. At the printers I shake hands with the guys I passed earlier and not so stealthily peek at their pages. They were numbers two and three in my group.

I get some noodle soup and suck down the rest of my energy gel and an hour later, a man approaches me, asking me my Chinese name. Turns out I am the only Westerner in this race, let alone the only one who wrote their name in Roman characters.

So yeah, I don’t exactly blend in. I told them I don’t have a Chinese name, and they give up trying to say “Lewandowski” (in their defense, most Westerners can’t pronounce it either) and “Mr. Cowry” is called to the podium. I’m not one to be humble in these kind of situations… 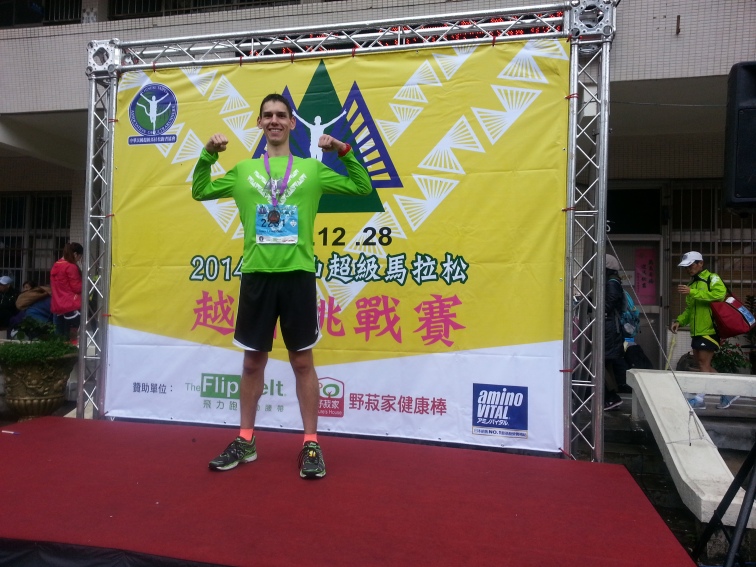 (Note the ubiquitous tote bag on the runner behind the podium.)

Up next up on the podium were the other guys my age that I passed near the end. We shook hands and received our little blocks, saying what place we got in our group.

I change into civilian clothes, look around one last time and head to the bus stop. A half hour through the woods and we’re back into the city. I feel like I have to transition back into society (as much as a Westerner can) on the train as I watch the city go by. Meanwhile all over the city, eggs are being cracked on griddles and coffee being brewed as the people start their Sundays.

The race doesn’t end at the finish line though. On 1/11 I have another mountain race and it’s time to start training for that one.